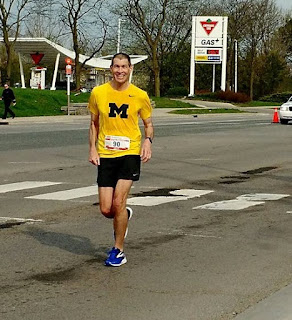 Jeff Burtka is a writer, a lawyer, a former rower and rowing coach, and an avid runner. He has a B.A. from the University of Michigan with a double major in History and English. Jeff also possesses a J.D. from George Mason University in Virginia.

Jeff is a native Michigander who moved out of the state in 1997. He moved to Chicago, then Virginia, then Connecticut, then back to Virginia, before finally returning home to Michigan in 2014. Jeff also manages a blog about Michigan. He decided to start Avid Runners, so he could write about something else he loves. You can read more of his writing here.

Jeff is married to a talented, intelligent woman who was a varsity athlete at the University of Michigan, enjoys running herself, and is a phenomenal writer. They have two talented and intelligent daughters who don't like to hug Jeff when he's sweaty from a run. Jeff and his family are dog lovers. They have a crazy mutt who is a great swimmer when chasing ducks but otherwise prefers using the stand up paddle board.

Jeff has run several marathons, including the 2019 Boston Marathon.