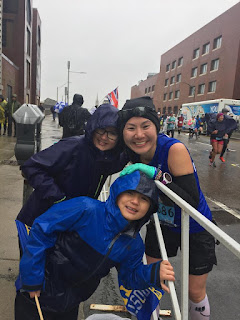 Linda Park earned her B.S. in Nutritional Sciences from Michigan State University and her Doctor of Pharmacy degree from Ferris State University. She has been the MICU pharmacist at Detroit Receiving Hospital since 2003 where she enjoys working with a multidisciplinary team and precepts students and post-doctorate degree pharmacists.

Linda is crazy about her kids, Brooke and Benjamin, and enjoys being a soccer mom and participating with their school activities. Linda became an avid runner after hearing about the Pokot tribe in Kenya. In 2013, she began running marathons to raise funds and awareness for clean water with Hope Water Project and later Hope Water International. To date, she has run eleven marathons, with the 2018 Boston Marathon being the most recent. Her long-term goal is to run all six Abbott World Marathon Majors. Occasionally, Brooke and Ben will run a 5k with their mom. If she’s not running, you will either find her at a yoga studio or biking.

While on the run, she listens to podcasts and music by bands such as AWOLNATION and Arcade Fire. She finds inspiration from her teammates and loves joining them for long runs. One of her favorite Bible verses is Philippians 4:13: "I can do all things through Christ who strengthens me."

The Metroparks Pass: One of the Best Investments for a Southeast Michigan Runner

Kensington Metropark by Jeff Burtka Training over the winter for a spring marathon when living in Michigan can be a frustrating, and even dangerous, undertaking. With gigantic temperature swings, sometimes in one hour, icy roads and sidewalks, and trails with ankle-deep snow (or deeper), just getting an easy five miler in is difficult. And trying speedwork or marathon pace runs is futile. A treadmill or an indoor track can help, but I don't know any distance runners who fell in love with running on a treadmill or short track. Our breed prefers to be on the open road or trail, not cooped up indoors. Luckily, runners in Southeast Michigan have a great option for miles of plowed and salted running paths. The Huron-Clinton Metroparks system contains thirteen parks in Livingston, Macomb, Oakland, Washtenaw, and Wayne counties. Not all of them have paved running paths, but the ones that do are perfect for every type of run, from short intervals to 20 milers. Indian Spring